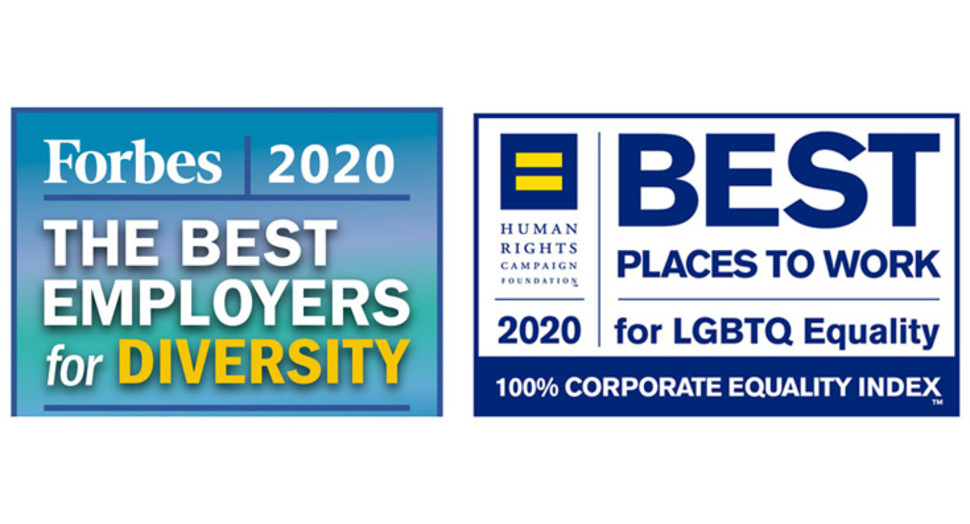 It’s a first: Forbes magazine released its third annual Best Employers for Diversity in America – and VF made the list.

And, that's not all the good news. We also received a perfect score of 100 on the 2020 Corporate Quality Index, marking the fourth consecutive year our company has earned the honor from the Human Rights Campaign Foundation. The benchmarking tool is considered a top measure of corporate policies and practices that support workplace equality for the LGBTQA+ community.

“These honors reflect the kind of organization VF strives to be every day,” said Anita Graham, Executive Vice President, Chief Human Resources Officer and Public Affairs. “Appreciating our associates for who they are and respecting each person as an individual are values woven into the fabric of our culture.”

“This recognition is really about our associates – about the work that they do in stores and in distribution centers and at brands to make this happen,” Reggie said. “We can come up with programs, but it is our associates who bring them to life.”

Forbes partnered with market research company Statista to create the annual ranking of America’s Best Employers for Diversity. The list was compiled by anonymously surveying 60,000 Americans who work for businesses with at least 1,000 associates. The surveys asked respondents to rate their organizations on criteria such as age, gender, ethnicity, disability and sexual orientation equality. Associates belonging to minority groups also were invited to nominate organizations other than their own.

The recognition validates the work we have done since launching our inclusion strategy in late 2017. That work has led to enhanced benefits for associates, training for hundreds of top-level associates, diverse Employee Resource Groups (ERGs) and a global Respectful Workplace Policy. Just this month, associates at the Jonestown Distribution Center celebrated the start of a new program through which adults with disabilities will be trained to work at the facility in Pennsylvania. Next month, VF will host its first ERG Leadership Summit in downtown Denver.

While proud of milestones like these, we won’t be resting on our laurels. Much work remains to be done, Reggie noted. Among the inclusion strategy’s most ambitious goals: to reach gender parity in VF’s director-and-above leadership population globally and to achieve 25% people of color in the United States – both by the year 2030.

“This isn’t a check-the-box sort of thing,” Reggie said. “This isn’t something we are doing because we have to. This is directly related to who we are as a company and what it means to work at VF. This is who we are and, truthfully, who we want to be. We want to build the most inclusive company in the world.”

Expanding Boundaries and Shaping the Future with VF Venture Foundry

Technology with a Heart: The Relationship Between E-commerce + Empathy

Human Rights Day: Why People Are Our First Priority

Driving Meaningful Change for the Betterment of People

A Moment Made for Change: Our Journey Continues